One of the wonder’s of Philadelphia’s fine fruit-growing climate is that we can grow certain warmer climate crops like the fig. South Philly is full of decades old fig trees brought over by immigrants from Italy and other Mediterranean countries. These trees were probably coddled in their youth, wrapped every winter as fig-growers still do in Brooklyn and other northerly regions. South Philly’s figs now grow unprotected, often untended, and fill entire back yards with little attention. Our climate has actually become more suitable for figs in recent years as a result of the urban heat island effect and the onset of global warming.

Figs are a great crop for Philly for several reasons: taste, productivity, and ease of care.  Many of you have probably enjoyed dried figs, but few have had the pleasure of fresh, ripe fig.  Most of the folks I’ve planted figs with in my work the Philadelphia Orchard Project (www.phillyorchards.org) have come no closer than a Fig Newton.  A fresh fig of good variety is a truly sublime fruit, bursting with flavor and texture.  People always point to the difference between a garden tomato and a store-bought one as a reason to grow your own vegetables.  I would posit an equivalent contrast between the experience of a fresh fig and a dried one.

Another reason to grow figs is their relative ease of care.  Apples, pears, cherries, peaches and all the common tree fruits suffer from a wide variety of pest and disease problems.  Figs are generally problem free and require relatively little in the way of pruning, watering, fertilizing, or other maintenance.  In a good year, a single mature fig tree can produce 40 lbs of fruit!  Figs are also beautiful plants: their large lobed leaves create a lush Mediterranean feel.

There are over a thousand species of figs (many Ficus are quite common as houseplants), but only two are grown for their edible fruit: Ficus carica and Ficus sycamorus.  Three types of Ficus carica are grown in the United States.  Smyrna Figs are the most commonly available, grown commercially in California but not at all adapted to colder climes.  The San Pedro Fig can be grown in the north, but requires pollination and generally also necessitates container growing.  The Common Fig is both self-fertile and the best adapted to growing in Philly and other cold climes.  There are dozens if not hundreds of named varieties of Common Figs, varying greatly in taste, color, and growth habit.  The varieties that do best in the north are generally very vigorous growers that can survive some winter damage or pruning and still produce the next season.  Bassem Samaan (www.treesofjoy.com), a fig collector and grower from Bethlehem PA, recommends the following varieties for the Northeast: Hardy Chicago, Celeste, Dark Portuguese, LSU Gold and Brooklyn White.  Brown Turkey is the most commonly planted hardy fig, but in general its taste is considered somewhat inferior.

Figs need full sun (6+ hours) for good fruit production.  Once established, they are pretty drought tolerant and require little additional watering except during prolonged droughts.  Figs also require minimal fertilizing, although a little compost in the spring can be helpful.  Figs produce their main crop in late summer and fall.  Brushing the fruit with olive oil apparently can hasten the ripening process.  If you successfully overwinter branches of the common fig (Ficus carica), they can also produce a smaller ‘breba’ crop in early summer.  Although birds, insects, and diseases are generally not a concern, squirrels can be sometimes be a competitor for the fruit.

Protection from winter cold is the primary issue in fig care for Philly and other northerly climes.  With proper attention, figs have been successfully grown outdoors in Chicago and Boston.  I’ve also seen them thriving in unheated greenhouses at 7200′ above sea level in Colorado.  There are four primary strategies for overwintering figs in our climate: microclimates, mulching, wrapping, and container growing.

The easiest way to overwinter figs in cold climes is to take advantage of microclimates.  In brief, microclimates are small changes in temperature created by features of the local landscape.  These can occur on scales ranging from a city to a small corner of a yard.  Although Philadelphia is officially in climate zone 6b, the urban heat island effect (all the pavement and brick absorb heat and keep the city several degrees warmer than surrounding areas) results in much of the city being zone 7 in actual practice.  This large microclimate means that other measures may not be necessary to protect figs in the more central and southerly parts of the city.  That said, better safe than sorry, especially in the case of young figs!  In terms of smaller scale microclimates, the best strategy is to plant your fig next to a south-facing wall, which will absorb sunlight during the day and re-radiate the stored heat at night.  A site protected from wind can also make a difference (it’s often wind-chill factor that can take our climate from fig-friendly to one  resulting in winter dieback).  With the right combination of microclimate features, it should even be possible to grow pomegranates and other zone 8 plants in Philly. A south facing wall is the best spot for a fig.

There are several techniques for protecting figs with mulching.  The simplest is just to put down a heavy layer of mulch (fallen leaves, salt hay, wood mulch) around the base of the fig tree to protect the roots.  Temperatures below 15 degrees will likely winterkill the branches, but the fig will happily regrow from its roots and often fruit in the same year.  The proprietors of Russell Gardens (www.russellwholesale.com) in Southampton PA, about an hour north of Philly, have been using this technique successfully for many years.  Mulching can also be used to protect branches.  On a young tree the branches can simply be bent to the ground, pinned, and then mulched.  On older trees, you can prune out the oldest, stiffest branches and bend the rest to the ground.  You can also sever the roots on one side of the tree with a shovel and then bend the whole tree over to the ground on the over side.  Mulching your figs does come with one caveat: rodent damage has sometimes been reported.

What they do in Brooklyn, Queens, West Philadelphia, Chicago too. . . Many folks from Italian neighborhoods in South Philly and elsewhere will remember the sight of fig trees wrapped in the winter.  Despite the warming trend over the last couple decades, recent harsh winters have shown that this is still an important technique to reduce winter damage and ensure a harvest.  There are many successful approaches to wrapping.  The easiest and best strategy is to trim the fig to somewhere under 6′, tie all the branches together, and then wrap with an old carpet and a tarp.  We also frequently use a length of fencing (at least 3′ high and 10′ in length) filled with fall leaves and preferably covered by a tarp.  Wrapping is generally done when cold arrives in November and removed when it warms in March. 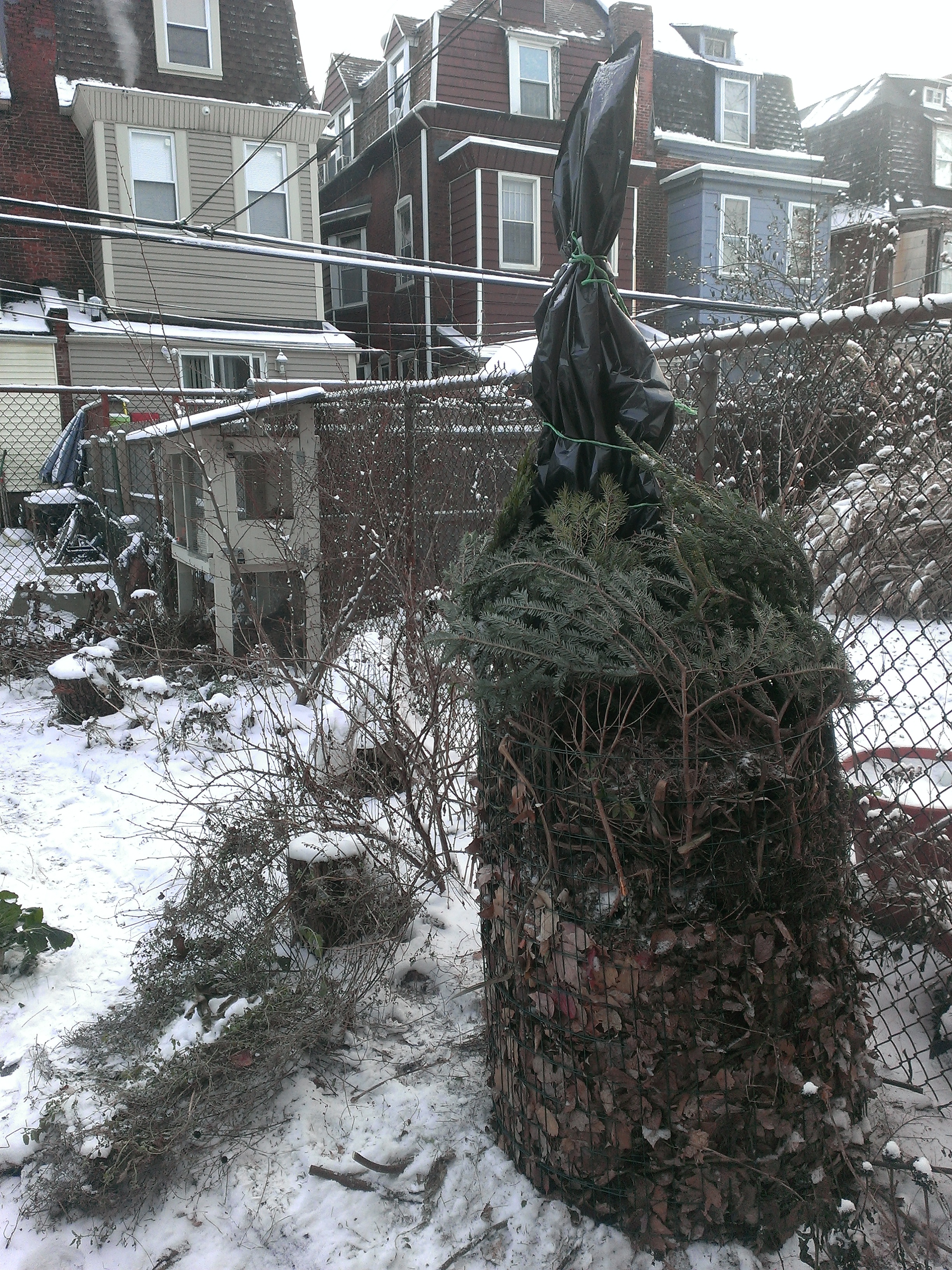 Figs are a great container plant.   As is generally the case, growing in containers requires a little more watering and other care than growing in ground.  Figs are best grown in large 15 to 20 gallon containers, although it is certainly possible to have success in smaller ones.  Once they have grown out to fill their container, you will need to repot and root prune every third year or so.  This is best accomplished in late winter or early spring before growth has begun.  Winter protection is as easy as moving the containers into a cellar or unheated garage after their leaves have dropped in fall.  Temperatures in the storage area should not go below 25 degrees or exceed 50 degrees Fahrenheit (you want them to stay dormant).  While they are dormant, the figs will need minimal watering, only every 3 weeks or so.  Bring the figs back outdoors in the spring after the threat of freezing weather has passed.  Container growing allows folks to grow figs on patios, decks, rooftops, and safely in places with contaminated soil!