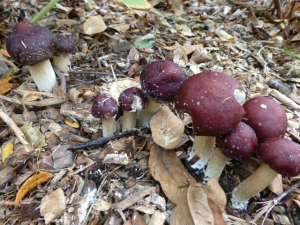 If you’ve ever had the urge to dig down a few inches into a pile of woodchips or a sheet­-mulched forest garden, you may have noticed the filamentous white tendrils of fungal mycelium inhabiting the woody debris below. This is just a glimpse of the natural processes that govern the life cycles within all forests: as plants and trees eventually die, certain mushroom fungi known as saprotrophs await their fall as their next meal, orchestrating the return of lignin and cellulose back into nutrients to be utilized by future generation of flora. Inhabiting the heart and sapwood of dead or dying trees or within the loam of the forest floor, saprotrophic mushrooms break down cellulose and lignin as a food source, the molecular structures of which are otherwise difficult for bacteria and other fungi to decompose. After months or years, the mycelium of saprotrophic fungi will organize its web-­like structure into a spore­-producing fruit body known to us as a mushroom. Arising almost overnight from the ground or from decaying trees as if out of nowhere, these mushrooms are only the tip of an iceberg, the sexual reproductive organ of a vast array of fungal mycelium performing a valuable service to life, largely in hiding.
Saprophytic fungi will almost certainly find their way into forest garden through naturally occurring spores from indigenous fungi in the surrounding ecosystem, inhabiting various niches within your design without even asking for them. Why then, should one engage in an effort to purposefully integrate a specific mushroom species into a forest garden? The answer is simple: some are better partners than others.
Stropharia rugosoannuata, usually known simply as Stropharia, Winecap, or The Garden Giant is one such mushroom of particular interest to us humans. Its large, burgundy­ capped fruit bodies are nutrient rich and delicious. While the mushroom is indeed an excellent food for humans (if you can get to it before the slugs and deer), the mycelial network below acts as both a primary decomposer of woody debris and also a secondary decomposer of other organic matter within a soil complex to benefit an intentional ecosystem.
Stropharia is particularly well suited to the environments of a forest garden. It can thrive in a woodchip and cardboard sheet mulch, in mulched areas around fruit trees and woody shrubs, or in a dedicated bed of woodchips and/or straw alone. Once established, a Stropharia colony can provide edible mushrooms for years to come, sometimes popping up where you least expect it as the mycelium migrates from its initial starting point into other soil regions, searching for organic matter to consume. As this happens, the mycelium within your forest garden will be busy breaking down mulch, aerating and unlocking nutrients in the soil, creating zones for root penetration, as well as absorbing and redistributing excess water runoff.

Establishing Stropharia is as simple as following the steps below. All you really need is locally available Stropharia spawn inoculant (seasonally available through Mycopolitan Mushrooms), fresh woodchips, and recycled clean cardboard.

1. Find an appropriate location. Any shaded or semi­shaded area will do. As long as you keep your bed from drying out, there’s some degree of ambient sunlight, you have a lot of freedom to establish Stropharia wherever you like in a forest garden. Get creative, and design to suit your environment. Keep in mind the larger the area you want to inoculate, the more spawn you may need to achieve faster colonization times and ensure success. One quart of grain or sawdust spawn can colonize a 5’X5’ area. Stropharia is best started in the spring and fall. The mycelium will have a hard time establishing itself in hot, dry temperatures of the summer and will go dormant in the winter.
2. Acquire organic matter. Stropharia does best on moist wood chips. Contact your local arborist or Fairmount Park Recycling Center to get a load of chips. Oftentimes, arborists will be glad to give you fresh chips that must be removed from a job site. If getting fresh chips, wait two weeks (but not too much longer) before spawning. Avoid aromatic softwoods such as cedar, pine, and hemlock as those trees contain anti­fungal compounds within their wood.
3. Spawn. If inoculating sheet mulch, simply scatter pre-inoculated grain or sawdust spawn provided by a company specializing in its production between the layers of cardboard and fresh woodchips, or layer in cardboard spawn that you’ve made yourself. To make your own cardboard spawn, place the stem butts of wild­harvested mushrooms on pre­-soaked cardboard. To do so, soak cardboard in water for about an hour. Peel apart to expose the corrugation and place stem butts around, or sprinkle sawdust or grain spawn. Sandwich the cardboard halves back together, roll up, and store in a loose-­fitting plastic bag with a few holes or slits poked in it. Check on your mycelium by peeking between the two sheets. The mycelium should start showing signs of growth from the spawn within a few days. When the mycelium has established thick, ropey white strands between the layers, lay out your cardboard as you normally would to sheet mulch between layers of woodchips. Using grain or sawdust spawn as opposed to stem butts makes for faster and more vigorous colonization. Cardboard spawn is great at quickly and easily expanding to larger areas. If establishing a dedicated bed, dig out a given area to a depth of about 6-­8”, or create a border of logs to contain a depth of at least 6-­8” of woodchips. The deeper your bed, the bigger the resulting mushrooms will be; some Stropharia beds are known to produce as much as 20 lbs per square yard of 6­-8” deep wood chips!
4. Hydrate. Water your bed immediately after construction and at least twice weekly for the next 4 weeks in hot dry weather. In the spring and fall, one or two waterings is all you really need before you can let nature take over.
5. Mulch or “case.” Spread a loose approximately 1-2″ layer of wheat straw, leaves, or coarse leaf on top of bed to prevent the mycelium from drying out. Stropharia benefits from indigenous, naturally occurring soil microbes, so consider adding some finished compost to your casing layer to encourage fruiting. Otherwise, you can just wait for microbial population to naturally establish.
6. Fruiting. Stropharia needs about a few months to colonize before producing fruiting bodies. Expect a bed once colonized, to fruit in the late spring and again in the fall. Don’t forget to pay close attention and look out for mushrooms during these times after heavy/consistent rains and high humidity.
7. Harvest. Allow the mushroom to grow to a larger size, but harvest when you start to see the young cap start to pull away from the stem as it unfurls. The younger mushrooms are delectable, while the overly­ mature ones can lack flavor and be too tough. Harvest by twisting the base of the mushroom to separate it from the mycelium below, or cut at ground level with scissors.
8. Eat! Stropharia is fantastic when brushed with oil and cooked on a grill or sautéed in butter and added as you would into any recipe that calls for mushrooms. It’s light, mushroomy flavor allows a great degree of culinary versatility.
Consider yourselves warned, the world of mushrooms can be highly exciting and possibly addictive. In addition to its culinary and garden landscaping benefits, Stropharia has been shown to filter out and consume coliformbacteria, as well as pathogenic nematodes in the soil. For more info on the remediation potential with mushrooms, as well as a whole kingdom of mushroom-­related info, pick up a copy of Paul Stamet’s book Mycelium Running, Tradd Cotter’s Organic Mushroom Farming and Mycoremediation, or visit http://radicalmycology.com/. To purchase Stropharia spawn produced from locally ­harvested strains, please contact Mycopolitan Mushroom Co. via Mycopolitan.com or e-mail info@mycopolitan.com.

This edition of POP Tips researched and written in December 2014 by Brian Versek, Co-Owner of Philadelphia-based mushroom farm, Mycopolitan Mushrooms.