These categories of woody perennial edibles are are often considered much lower maintenance than fruit trees. As a result, it’s come to POP’s attention that they may not be receiving the attention they deserve when interplanted in our community orchards, so we’ll be working this season to highlight what to watch out for and how to properly care for them throughout the orchard seasons.

Just as winter is time to prune your fruit trees, it’s also time to prune and tend your berries to ensure a boom harvest this season!

Raspberries and blackberries are unique in the world of berry bushes in that they don’t have any permanent wood.  Each cane (branch growing from the ground) only lives for 2 years.  In old-fashioned bramble varieties, first year canes have no flowers or fruit and then bear in spring/summer of their second year.  Newer ‘ever-bearing’ varieties flower and fruit on new canes in the fall of their first year and then again in spring/summer of their second year.

Blackberries (Rubus): In winter, remove all 2nd year canes and thin out to 8 or 10 strongest new canes. Shorten canes to 7’ and laterals to 15”.  In summer, pinch out tips of new canes when they reach 3’ height.

MULTI-STEMMED SHRUBS
All other berry bushes fit in this category (we’ve listed some of the ones we plant most often below).  Use thinning cuts for a less bushy effect. This increases light and air circulation to the interior of plant. Remove stems that are more than 4 to 6 years old, sometimes younger for certain species. Older stems are less productive, so their removal enables younger stems to take their place. When pruning, cut stems to l-2” above crown of plant.

IMPORTANT: avoid removing more than 30% of living wood in one growing season, or there will be a flush of vegetative growth as the plant tries to restore its former food-producing capacity. The same can be said for fruiting trees.

Currant/Gooseberry/Jostaberry (Ribes): Remove shoots after their 3rd year. Remove all but 6 new stems. 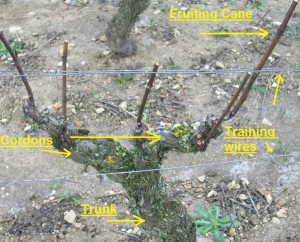 Grapes: During the First year after planting, simply cut to 2-3 buds.

During the second year, you must select a training system. If you have 2 wires, use the 4-arm kniffin method, if one wire, use single-curtain cordon method, if you have a fence, use the fan system to utilize the area of the fence. Decide on a height for the trunk and thin the plant to a single trunk. Cut back to just over the height of the highest canes you want. If no vine reaches the desired height, repeat simple first year pruning to focus energy from the weak roots into 2-3 good shoots, one of which will be chosen next year as the trunk.

During the third year select 4 vines of first year wood. Always choose thick, vigorous vines with at least 6” between nodes (places where this year’s buds will grow). Cut them to 10 buds on each, then select 4 other vines and cut them to 2 buds each.

To prune an overgrown vine, select the canes to save, choosing from the canes which received the most sun during the previous season. They are usually darker in color and larger in diameter (at least as thick as a pencil). Cut Concord grape vines to the best 60 buds, cut less vigorous varieties to 40 buds (these are the maximum numbers for a mature, healthy plant, which lead to good quality grapes).

Tom Zabadal has an extensive series of YouTube videos on maintaining grapes if you’re interested in learning more and expanding your production.

Hardy Kiwis (Actinidia): Regardless of the structure they are growing on, kiwi vines should be pruned initially to a single trunk and trained straight up by tying to a post (no twining!). At the appropriate height for the structure, the vine should then be pruned into two permanent cordons (main branches) in opposite directions. Thin out laterals growing from the cordon to 12” apart. Additional summer pruning is needed to keep these vigorous vines under control. Here’s a great video to assist and a guide with photos from Penn State Extension to read through as well.