POP encourages all orchard partners and backyard fruit growers to take every step in orchard management prior to fungicide application. Other steps to take include applying foliar (i.e. on leaves) or soil-soak compost tea, neem oil sprays, biofungicides, dormant pruning to open your tree to optimum light and drying breezes,  and planting proven pest and disease resistant cultivars. Michael Phillips is part of the Holistic Orchard Network and one of POP’s gurus. This holistic orchard management schedule is very helpful and adaptable for your space and seasons.

However, the unfortunate reality is that ecosystem imbalances, plant propagation methods which result in lesser genetic diversity, and extremely fast rates of reproduction and adaptation among pests and diseases make it very difficult to maintain no-spray orchard regimens. By the time you notice most infections, it’s already too late. Therefore, if you’ve had issues in prior seasons with fungi on your fruit trees and you’re making the decision to spray, now is the time to start an organic fungicide regimen to reduce primary infection of fungi like scab, fire blight, sooty blotch, flyspeck, blossom end rot, brown rot, mildew, and peach leaf curl, and more.

A full list of diseases that sulfur can help with:

If damp weather conditions are imminent or present, with leaves likely to remain wet for more than 9 hours, application of fungicides including fixed copper, sulfur, and Bordeaux mixtures (combination of copper sulfate and hydrated lime mixed before application) may be helpful. As soon as leaf tips emerge, apply a fungicide, with reapplication 10-14 days later if rain continues, and a third spray toward the end of the bloom period after petals have fallen. As always, read the instructions carefully for your designated spray to time your applications properly.

The application of sulfur sprays in late winter and early spring is commonly used for control of certain fruit tree diseases. Although effective, sulfur is a drastic measure and should only be used as a last resort for for combating a disease in orchards. Even though it is accepted as an organic spray, it should be noted that sulfur is still toxic and should be used with proper safety precautions. It is also a indiscriminate killer. It will not generally harm honeybees, but it may kill a variety of both beneficial and pest insects, fungi, and other microbes. For this reason, use sulfur only if a disease is having a dramatic effect on fruit production or tree health and other means of control have been ineffective. Because of the damage it can cause to the arboreal microbiome, it may also be advisable to follow a sulfur spray regimen with applications of compost tea and/or effective microbe sprays to re-establish beneficial micro-organism populations.  Biofungicides are a new alternative to harsh copper and sulfur sprays and may also be used in combination with them.

Sulfur is naturally water insoluble. It is available in a dry powder form, but formulations termed “wettable” or “flowable” are generally best for orchard applications. Colloidal or micronized sulfur products are also preferred, as their smaller particle size is more effective in providing good coverage. {1}

When searching for a sulfur spray product you will also come across a lime sulfur compound. This will have the disease fighting benefit of sulfur with the added benefit that lime will allow for sulfur to penetrate the plant tissue, thereby increasing its efficacy and faring better against rain or snow. This added benefit does come at a cost, as the lime can damage the plant and the product is also more toxic than straight sulfur alone.

Sulfur spray is moderately toxic to humans and other mammals, so avoid direct contact and inhalation. When applying and mixing, make sure to wear long sleeves and long pants, preferably of waterproof materials. Wear waterproof gloves and cover all other areas of exposed skin. Wear goggles and a dust mask. Never spray into the wind.

For each application, please follow the directions on your packet for proper mixing proportions and spray the solution until all branches are drenched.{3} Sulfur spray should never be applied in temperatures above 85 degrees or if the temperature will exceed 85 degrees within 3 days of application. Also avoid use of sulfur spray within a month of oil spray applications. {2} Because sulfur can be corrosive to metals, sprayers with all plastic parts are preferable.

Brown rot is a fungal disease that effects stone fruit crops. Before spraying for brown rot, time and diligence should be taken to remove all infected fruit remnants from last year, both those still hanging on the branches and on the ground around the tree base. Another important preventive method is winter pruning to allow for greater air flow so branches can dry faster after rain events. Mulching at the tree base can also help, as the fungal disease can also be contracted from moist grass underneath the tree. To combat brown rot, you can spray a lime sulfur spray during dormancy.  In the early spring, you sulfur spray should be applied just before bloom and just after bloom. {e}

If brown rot is causing serious fruit loss in your stone fruits, consider a sulfur spray application in early spring just before and after blooming.

Peach leaf curl disease, scientifically known as Taphrina deformans, tends to attacks peach trees in humid climates. Sulfur spray can be used to kill the pathogens when the fungus is in the dormant stage. Late winter is the time to spray for peach leaf curl if it was a serious problem the year the before.  For peach leaf curl, once the disease breaks dormancy for the season it is too late to spray. If you don’t spray, the best means of control is removing infected leaves from the tree and any that drop to the ground.

A little peach leaf curl is not a big concern, but if your tree lost most of its leaves to this disease last season, a winter application of sulfur can help.

Fire Blight is a common bacterial disease of pome fruits, mostly spread in humid spring weather. Two prior methods to keep in mind for control of fire blight are to limit high-nitrogen fertilizers and to prune back 12 inches behind any sign of infection on branches. This emergency pruning should be done any time of year, as soon as you see any sign of the disease. If fire blight is an ongoing issue with pear, apple, or quince trees in your orchard, late winter is the time to spray sulfur while the bacteria is in dormancy. In some locations, replanting with fire blight resistant cultivars may be necessary. 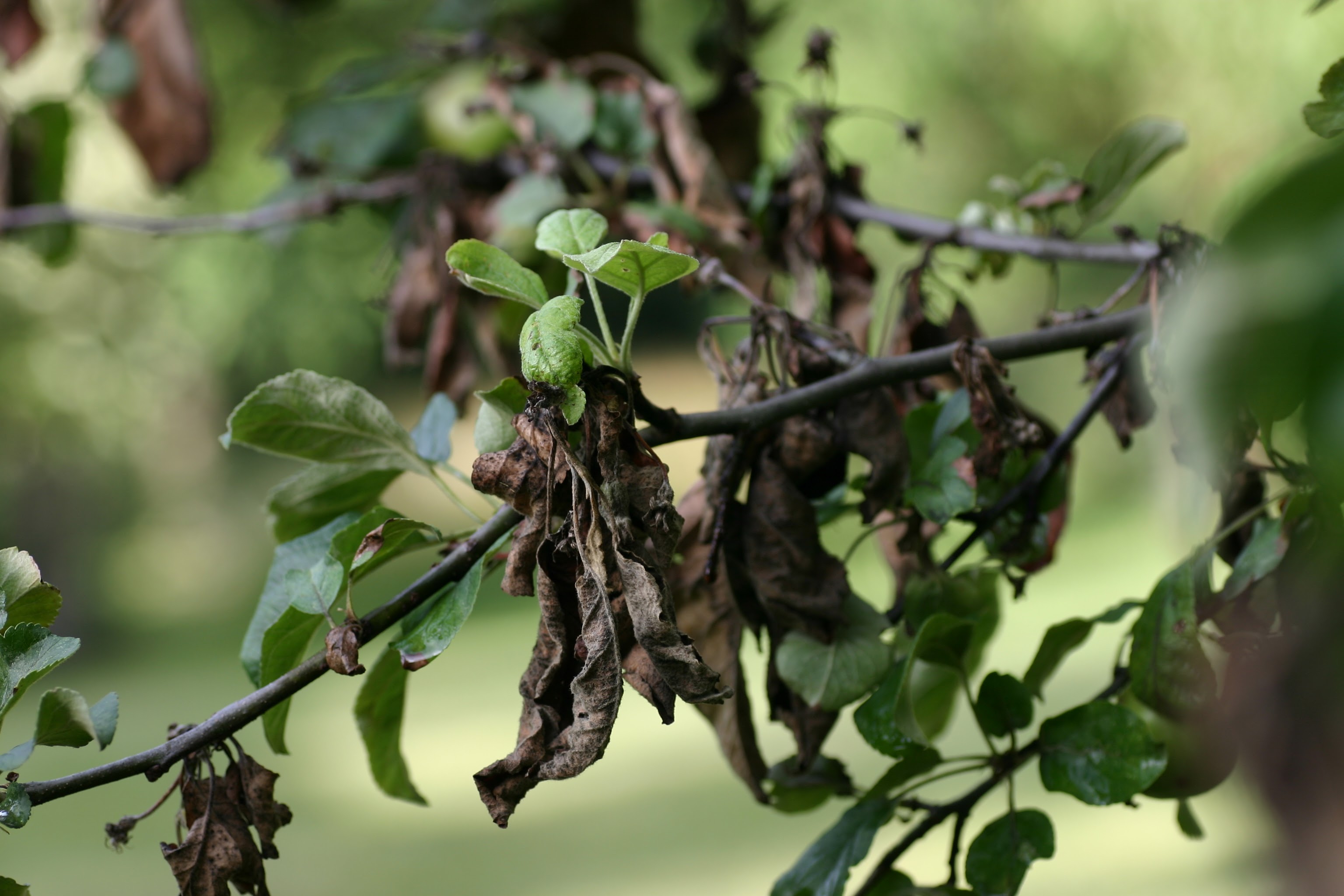 Late winter applications of sulfur can help reduce serious, ongoing problems with fire blight.
Sulfur Spray for Black Rot (on grapes)
In the eastern US, black rot, or Guignardia bidwelli, is one of the most harmful fungal diseases for grape production. The disease can infect all green parts of the grape vine, though the most harmful effect of the fungus is the effect on fruit.  You will notice black rot on your grape vines when leaves develop reddish-brown, circular lesions. As the spots mature, the center turns brown and small, black spots called pycnidia, appear in the center. Infected grape fruits turn dark brown and become covered in the black pycnidia. Infections occur if leaves or grapes stay wet for an extended period of time.  Even if you are following pruning regiments and disease control, the disease may still have an effect on your grape yield. If so, you may consider using a fungicide such as sulfur spray starting early in the spring to protect your fruit.  Grape cultivars with some wild/American parentage are generally more resistant to black rot and other diseases; these include Concord, Catawba, Niagara, Mars, etc.

Again, remember that all sulfur and copper-based fungicides should only be used as a last resort and all safety precautions should be followed!

How to Grow No-Spray Organic Apples