It might surprise you to learn that almost no fruit trees are grown from seed. There are several reasons for this, one of the primary being that most fruit tree seeds are unlikely to produce the same variety of fruit as the parent tree. This is especially true in the case of apples, whose seeds may not even produce edible fruit, and have maybe a one in a million chance of producing fruit similar to the parent tree. As a result, chances are that every apple that you have ever eaten has come from a grafted tree. All named varieties of tree fruit, like a ‘Seckel’ pear or ‘Goldrush’ apple, are propagated via grafting and are thus genetically identical to all other fruits of the same variety name.  Even trees that do grow fairly true from seed – such as peaches – are also usually grafted as this process is less-time consuming and easier to control than starting trees from seed.

So, what is grafting? As defined by Greg Rothman of Cummins Nursery, grafting is “a form of plant propagation in which scion and rootstock are surgically combined.”

The rootstock is exactly what it sounds like – the roots of the tree that you would like to grow. The rootstock determines the size of the tree, and can also be chosen for characteristics such as disease resistance and drought resistance. POP, for example, generally uses semi-dwarf rootstock, which makes for 12 to 15 foot tall trees.  The same ‘Goldrush’ apple scion would grow to 30′ grafted on standard root stock and 8′ on dwarf root stock.

Rather than being grown from seed, rootstock is clonally propagated. The desired variety is grown for about a year, then cut close to the base. The tree will send up a number of sprouts, and as they grow, their bottoms are covered with sawdust or sand to encourage root growth. The same can be done to the suckers sent up by more established trees. Once they have grown roots, the individual sprouts can be cut and used as rootstock.

Scion wood refers to the part of the graft that will produce fruit. Scions are usually first year wood with at least 2 or 3 buds cut from trees with the variety of fruit that you wish to grow. It’s best to cut scion wood while it is dormant in the wintertime, as well as to use rootstock that is dormant. This allows the tree more time to heal as it slowly wakes up.

One of the most common forms of grafting is called “bench grafting,” so called because you can do it indoors, sitting on a bench (if you’d like). Participants learned this technique from Greg Rothman at POP’s grafting workshop at Awbury Arboretum in March 2016.

First, make sure that your rootstock and scion are about the same thickness at the point where you will be connecting them. The idea is to get as much as the cambium of the rootstock and scion to be in contact. The cambium is the green layer of cells between the bark and the wood. It is made of meristemic tissue; undifferentiated cells that can become wood or bark, and is thus where the graft will connect. 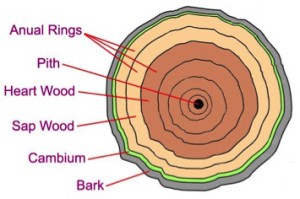 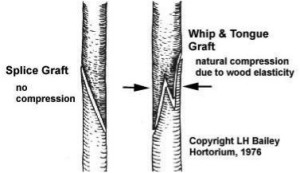 Next, cut the scion back to two or three buds; this ensures that the tree will focus its energy on these points. After that, the graft needs to be tied in place. You can use a variety of materials for this – tape, rubber bands, etc. At the grafting workshop, we used a parafilm wax tape that stretches to apply increased pressure, holds in moisture, and eventually decomposes so it doesn’t need to be removed later. (Some other grafting rubbers and tapes need to be removed once the graft is healed so they won’t strangle the tree). The graft should take around 4-5 weeks to heal.

Next, the pruned edge of the scion wood needs to be sealed in order to prevent infection. You can buy tree wound sealant to do this or even use Elmer’s glue.  The preferred technique involves heating wax and then dipping the tip of the scionwood, making sure to completely coat the exposed edge. You can melt the wax in a double boiler or crock-pot.

Lastly, make sure to label your tree! It’s going to be some time before it produces mature fruit, so you’ll want to remember what fruit cultivar you’ve got on your hands.

STORAGE & PLANTING OUT YOUR BENCH GRAFTS

We recommend that you pot up grafted trees immediately, and then keep them in a cool place (such as a garage) to give the tree time to slowly wake up. Make sure to keep the soil moist. Plant trees in the ground around tomato planting time, around May or June, and make sure they get about an inch of water per week during the first year. At around the same time, you can remove the wrap (if using non bio-degradable type) around the graft so as not to strangle the tree. Alternatively, transplant your successfully grafted tree to a larger container to grow out and plant in the fall or following spring.

OTHER TYPES OF GRAFTING

While bench grafting is the most common method for grafting fruit trees, there are some other ways to do so.

Chip budding – The rootstock is planted out, and then a single bud is cut out and replaced with a bud from the scion wood desired. It is then tied in place, and given time to heal.

Top Working – This method is used usually to change over the variety of a more established tree. Cut scions are inserted between the bark and the wood of the parent tree, and then wrapped in place. All exposed surfaces are then coated in wax. Using this method, several different varieties of tree can be grafted onto the same tree. Sam Van Aken, a professor at Syracuse University, has a single tree onto which he has grafted 40 different kinds of fruit!

Bridge Grafting – This is a method for rescuing damaged trees that are more than four years old. When a tree is girdled – meaning the bark has been removed – then the tree can no longer transport food produced via photosynthesis by the leaves to the roots, eventually killing the tree. Scion wood is cut and inserted into the healthy bark above and below the damaged part of the tree, thereby allowing the tree to once again transport food from the leaves down to the roots. If the tree is less than four years old, it is recommended to simply cut the tree below the wound, allowing it to regrow from that point.