It’s June, and that means a piece of good news for us all: the juneberries are ripening! While this is making some of us leap up and down doing happy dances, I’m sure it’s also making some ask, “What the heck’s a juneberry?!”

Great question. Read all about them below, download this handy POP plant info sheet, and check out our new map of some of the numerous juneberry/serviceberry locations in the city!  And join the POPHarvest Google Group for community harvest updates now and forever! Now, onto it… 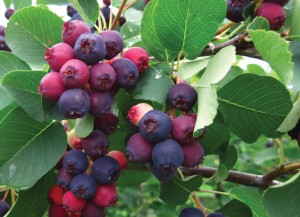 And this is a juneberry tree in flower: 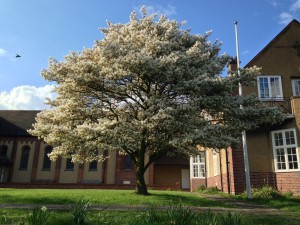 The juneberry (also known as serviceberry, shadberry, sarvis, sarvisberry, snowy mespilus, shadblow, maycherry, shadbush, shadblossom, shadflower, sugar pea, wild pear, lancewood, boxwood, Canadian medlar, chuckley pear, and Saskatoon), is a large shrub or small tree ranging in height from 16 to 32 feet. Juneberries are native to North America, are very hardy and adaptable, and are usually found growing at woodland edges, stream banks, and in hedges. At least one species is native to every state in the US except for Hawaii.

Juneberries have slender limbs, and scaly bark ranging in color from gray to brown. White, five-petaled flowers bloom in April or May at the same time that leaves begin to emerge. Flowers grow in racemes on last year’s grow, meaning that flowers grow on separate stalks evenly spaced along the branch:

Juneberries are partially self-fertile, meaning that having more than one is not necessary but will increase fruit yields. They are pollinated by bees and other insects. Fruits are round, about .3-.7 inches across, and are usually dark purple in color (they look and taste similar to blueberries). As you’ve probably guessed, they usually ripen in June. [On a side note, some people believe that the name ‘serviceberry’ came about because these trees would be blooming around the same time that the ground would be soft enough to hold services to bury people who had died over the winter.]

Juneberries (or serviceberries, or shadberries, or whatever) make for good eating. Fruits are edible across all species and are sweet and juicy. Some species produce fruit that is better for eating raw, while others produce fruit more well-suited to making jams or wine. The seeds can also be eaten and have an almond-like flavor. Recipes abound, from pies and jams, to muffins, sauce, pudding, and juneberry crisp. Check out some recipes here.

Juneberries are also a key ingredient in pemmican (or pemikan), a staple food for Native Americans north of Missouri and Nebraska. Pemmican is a made by mixing dried and powdered meat, fat, and dried, ground juneberries together; it’s a high calorie, long-lasting food that was often taken on long hunting trips and was later adopted by European backwoodsmen. You can check out a recipe here. South of Missouri and Nebraska, many Native American groups mixed juneberries with cornmeal to make cakes and added juneberries to stews.

Juneberry wood is hard and heavy, and has a reddish-brown heartwood; Native Americans used it for making tool handles, fishing rods, and arrow shafts. Members of the Pit River Tribe in California also used juneberry wood to make body armor.

Traditionally, juneberries have been used primarily for food but have been used medicinally as well (food and medicine, of course, are intertwined, and in many ways are one and the same). Native peoples of Canada used to steep the bark in tea to ease stomach troubles, and a tea made from the bark and twigs was given to mothers to aid with recovery after childbirth. Used in combination with other plants, parts of the juneberry tree were also traditionally used as a contraceptive.

Juneberries are an excellent source of iron; one serving contains around 23% of the daily recommended intake, which is almost twice the amount contained in blueberries. They also have a lower water content than blueberries, meaning that they have higher concentrations of proteins, carbs, and lipids. They are high in phenolic compounds, which in recent studies have been found to play an important role in cancer prevention and treatment. They also contain relatively high amounts of potassium, which can help to prevent and ease muscle cramps, as well as large amounts of magnesium and phosphorous. They have similar levels of vitamin C, riboflavin, pantothenic acid, vitamin B-6, folate, vitamin A, and vitamin E as blueberries. Given that blueberries are often considered a superfood, juneberries have quite the nutritional repertoire.

While they prefer soil that is moist and fertile, juneberries will thrive in almost any soil, and will tolerate part shade as well as full sun. Here in Philly, we’ve seen highly productive yet neglected street trees planted essentially in rubble or gravel! Juneberries are generally easy to grow and require little care; it is usually unnecessary to prune them, unless you have a grafted variety that sends out vigorous rootstock suckers. Trees that get plenty of sun will fruit the best. They are usually propagated via grafting or seed. Cornell university recommends specifically planting Amelanchier alnifolia species, which produces the best and most fruit. Named varieties such as ‘Smoky’, ‘JB-30’, ‘Martin’, ‘Northline’, ‘Regent’, and ‘Pembina’ are recommended for the northeast.

Seeds require a 3-5 month period of cold stratification, ideally followed by scarification or a four-week warm stratification. Some varieties of juneberries can be grafted onto rowan trees.

While juneberries are hardy and suffer from few diseases, you may find yourself competing with birds for the fruit once it begins ripening. Caterpillars from various moths also feed on juneberry trees, though usually not too heavily. Trunk borers can also affect juneberries, and in some years, when late juneberry flowers overlap with wild roses and brambles, bees may spread bacterial fireblight. In recent years, POPHarvest has additionally seen a fair degree of Amelanchier-Juniper rust (similar to Cedar Hawthorn or Cedar Apple Rust) affecting trees during our harvests.

Cedar rust disease is quite common on Juneberries and can affect up to 50% of harvest depending on the year. (Photo: Wikipedia)

Let’s get out there and harvest some juneberries!

The Philadelphia Orchard Project stresses that you should not consume parts of any wild edible plants, herbs, weeds, trees,​ or bushes until you have verified with your health professional that they are safe for you. As with any new foods that you wish to try, it is best to introduce them slowly into your diet in small amounts.

The information presented on this website is for informational, reference, and educational purposes only and should not be interpreted as a substitute for diagnosis and treatment by a health care professional. Always consult a health care professional or medical doctor when suffering from any health ailment, disease, illness, or injury, or before attempting any traditional or folk remedies. Keep all plants away from children. As with any natural product, they can be toxic if misused.

To the best of our knowledge,​ the information contained herein is accurate and we have endeavored to provide sources for any borrowed​ material. Any testimonials on this web site are based on individual results and do not constitute a warranty of safety or guarantee that you will achieve the same results.

Neither the Philadelphia Orchard Project nor its employees, volunteers, or website contributors may be held liable or responsible for any allergy, illness,​ or injurious effect that any person or animal may suffer as a result of reliance on the information contained on this website nor as a result of the ingestion or use of any of the plants mentioned ​herein.

Trees for Gardens, Orchards and Permaculture by Martin Crawford