Pruning is the regulation of plant growth and productivity through branch removal and bud manipulation. Good pruning can help fruit trees become more resistant to pests and disease, as well as bear a larger, more consistent, and better quality harvest.  Annual pruning is strongly recommended for best health and production of the more common pome and stone fruits (apples, pears, peaches, plums, cherries, apricots).  Most uncommon fruits have less intensive pruning needs (see list at the end of this article). 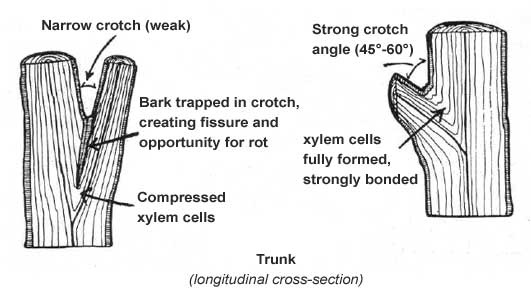 How, when, and what to prune will depend on what type of tree you are working with. Be familiar with your tree’s growth habit (pyramidal, spreading, bushy, climbing, vigorous) so as to choose the pruning style best suited to the plant’s natural growth tendencies. Also learn about its fruiting habit; inadvertently pruning fruiting wood or specialized fruiting structures can seriously compromise a tree’s ability to bear fruit.  See tree list at the end of this article for more information specific to different fruit types.

Damaged and diseased wood, suckers and watersprouts should be promptly pruned, no matter what time of year.  During active growing season, always sterilize tools with rubbing alcohol or a 10% bleach solution between each cut.  A spray bottle is the easiest means of application.

Most annual pruning should be done during the dormant season, before buds begin to swell, and preferably on a day when the temperature is above freezing (late January through early March in Philadelphia).  Most tree diseases are dormant in winter, thus reducing the spread of infection. However, sterilizing tools is still good practice especially with trees known to be infected.  Pruning cuts made in winter will also heal more quickly with the spring growing season to follow.

Some exceptions include…
Peaches should be pruned during or after they bloom in spring. Apples, pears, and grapes can be pruned earlier, starting in late December.  Espaliered fruit trees need both dormant and active season pruning to maintain their form. 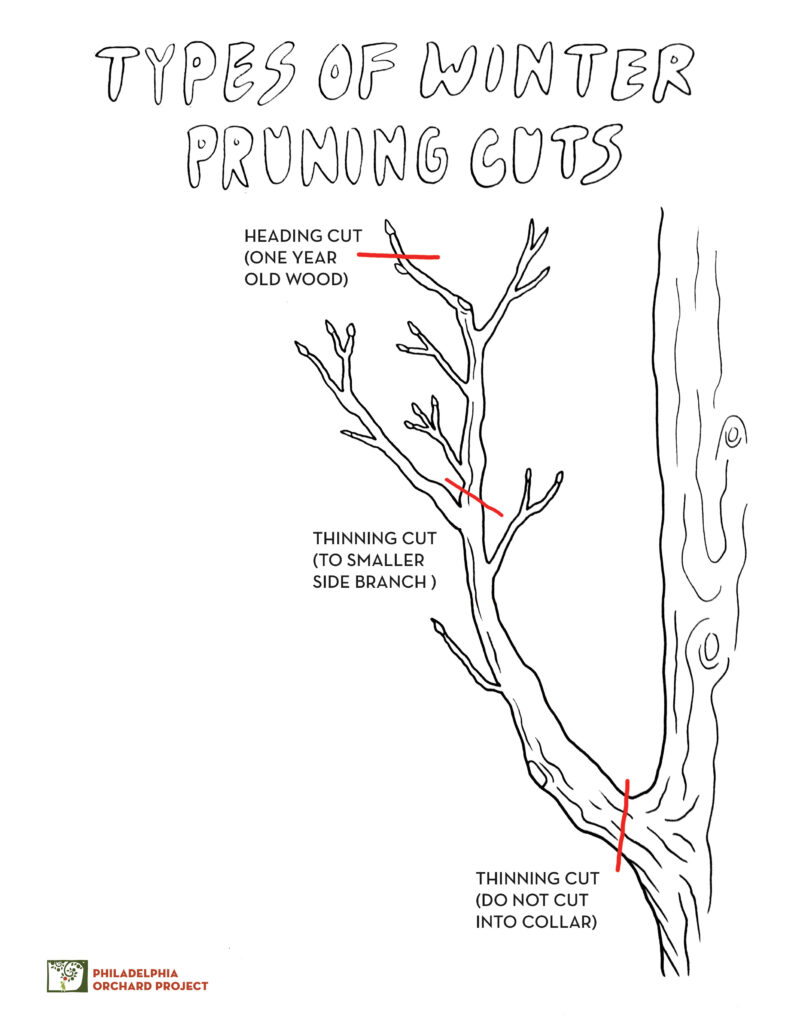 Thinning: To allow more light and air into the interior, cut branches back to their point of origin on the parent branch.  This is a highly recommended technique and the type of cut used most often.

Heading: The opposite of a thinning cut in that it induces more side branching.  Cut a branch back to a lateral bud heading in the direction you want the branch to grow. Make the cut ¼” above a bud (to allow for dieback) and at an angle parallel to the direction of the bud.

Damaging Cuts – Do Not Use!

Shearing: One of the worst things you can do to a fruit tree is to remove a set length from all of the outer growth, in which cuts fall randomly above and below buds. Shearing will cause a flush of dense, bushy growth, which is fine for hedges, but can ruin trees.

Notching: By nicking vascular tissue above or below a lateral bud, you can determine whether a bud becomes a shoot or a flower. The nick should be close to the bud, about 1/8” wide, but not deep (a mere scratch – to cut the phloem just below the bark surface). It should reach halfway around the stem. To produce a shoot, notch above dormant bud, cutting off the flow of growth hormones from terminal bud. To produce a flower, notch below the dormant bud, sending the flow of carbohydrates from the leaf to the bud instead of the rest of the tree. 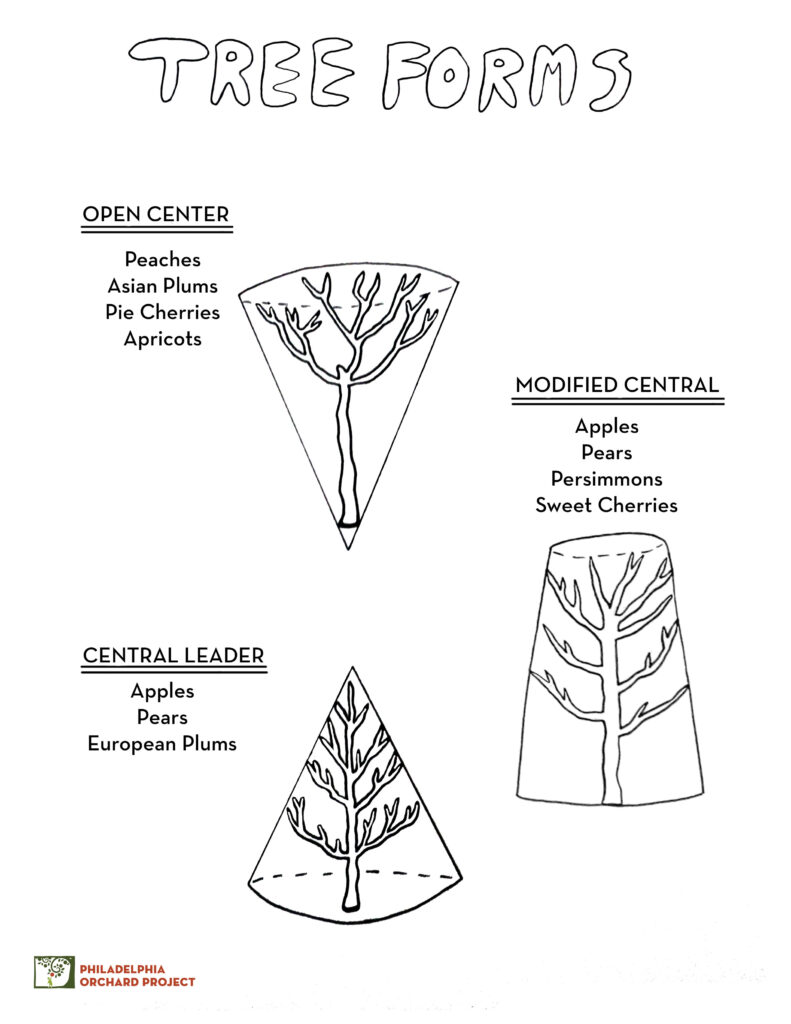 The central leader method is for trees with a strong vertical (conical, pyramidal) growth habit (apples, pears, European plums). Usually 3 tiers (whorls), each consisting of 4 branches, 6-9” apart, and spaced evenly around the trunk.

The modified central leader is an alternate method for trees with a moderate vertical growth habit, recommended for sweet cherries and some apples and pears. 5-6 branches are left spiraling evenly up the trunk, 8-12″ apart, but the trunk is cut back to a main branch at 5-8′, and treated as open-center from that point.

Vase or open-center is used for tees with a spreading, vase-shaped growth habit (such as peaches, Japanese plums, and pie cherries). A whorl of 3-5 branches is left within 2-3′ above ground; any main trunk is cut back to the topmost branch.

Note: As a general rule, avoid removing more than 30% of living wood in one growing season or there will be a flush of vegetative growth as the tree tries to replace the removed wood.  If a larger percentage needs to be removed for some reason, consider summer pruning to minimize regrowth.  Peaches are a notable exception in that up to 50% of living wood is removed every year.

Smaller branches.  To remove a branch less than 1” wide you will make a single cut just outside the outermost ring of the branch collar. Start by locating the branch collar, which is a swollen area of compressed rings of bark tissue/wood at the base of a branch. It is the point at which the growth pattern of the trunk overlaps that of the branch, strengthening the connection of the branch to the tree as new growth is added each year. Branch collar tissue is the tissue that heals and closes over the wound made by removing a branch. It is also a storehouse of phenolic compounds which prevent fungal diseases from entering the plant while the wound is healing. 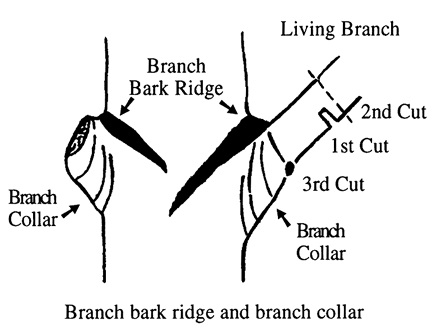 Larger branches.  A three cut approach is best for pruning branches larger than 1” in thickness.  Although the final cut should be made in the same location, just outside the branch collar, preparatory cuts are recommended to avoid the weight of the branch tearing down the side of the trunk and causing significant damage to the tree.  Use a handsaw rather than a pruner to make cuts on larger branches.

Fig (Ficus)- In protected sites, can be grown as open center form.  In spring, remove winterkilled branches.  In exposed sites, wrapping or mulching may be needed for winter protection.

Peach (Prunus persica)- Prune during or just after flowering.  Remove up to 50% each year.  Open center form.  Thin fruit to 8” apart.

As with most tools, don’t buy the cheapest available!  Quality tools will perform better and last longer.

When your trees get larger, you’ll likely also need: